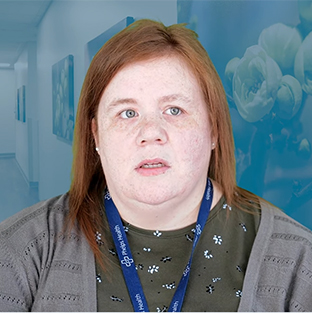 While, on average, about 98% of known COVID-19 patients in the US survive, this statistic needs some context, according to a Phelps Health employee who has battled the disease.

After being infected and spending more than 70 days in hospitals, Jessica Hoffman is a COVID-19 survivor. However, she says her life will never be the same as it was before getting sick from the virus.
“It's been a life-altering experience for me,” she said. “I will forever be changed by my time in the ICU [Intensive Care Unit]. I'm still battling with some lingering COVID-19 symptoms.”
Hoffman, a 37-year-old Dixon, Missouri, resident, who works as an Epic (electronic medical record) analyst at Phelps Health, tested positive for COVID-19 in the summer of 2021.
“My symptoms were the classic symptoms – shortness of breath, cough, weakness. I also had a terrible headache,” she recalled.
Hoffman isolated at home and tried to take care of herself.
“It was getting worse, and I thought, well, it was just running its course. It's going to get worse before it gets better,” she said.
Her breathing, along with her other symptoms, worsened, so she went to the Phelps Health Emergency Department. Hoffman was then admitted to the hospital.

Hospitalized for 74 Days
“They [care team] started treatments right away. I received [convalescent] plasma, but unfortunately, I just progressively got worse,” she said.
Days after being hospitalized, she was transferred to the ICU. She recalled that no treatments seemed to be helping, and her oxygen levels remained low. She was eventually intubated (a tube placed down her nose or mouth to help her breathing).
Hoffman was flown by a medical helicopter to SSM Health Saint Louis University Hospital, where she was admitted.
“I was on a vent [ventilator] for three weeks,” she said. “I had a trach (tracheostomy tube to help her breathe) put in at one point, but they [doctors] were able to remove it.”
After 43 days in the hospital in St. Louis, Hoffman returned to Phelps Health to start her rehabilitation, where she had to learn how to walk again.
Hoffman was complimentary of the Phelps Health staff who cared for her.
“The physical and occupational therapists, the nurses and the doctors -- the care I received was just really amazing,” she said.
Hoffman was hospitalized for a total of 74 days at Phelps Health and in St. Louis. She missed about four months of work.
Because of visitor restrictions due to COVID-19, her mother, father and brother had to take turns visiting Hoffman.
“My parents…were there every day, just hoping for me to get better. I know those first couple of weeks were really rough,” she said. “The doctors were giving my parents very low odds of survival, but I pulled through.”

Challenging Recovery
Hoffman described her recovery from COVID-19 as challenging. While in the hospital on a ventilator, Hoffman was given a heart medication called vasopressor, which constricts blood vessels and raises blood pressure.
While her heart and other major organs were getting enough blood, her fingers were not and became necrotic (when body tissue dies).
“I had to eventually have three fingertips amputated on my dominant hand,” Hoffman said. “Even if all of my COVID-19 symptoms go away, I will always be missing part of my hand because fingers don't regrow.”
Hoffman said the effects of COVID-19 can have a lasting effect on people.
“I think it's really important for people to realize that COVID-19 can impact your life for a long time,” she said.
Hoffman said she never thought that she would get as sick as she did.
“I've had co-workers and friends who had COVID-19, and the worst of it was maybe two weeks for them,” Hoffman said. “I thought maybe I'd just struggle a bit longer than them [because of my heart disorder]. I never imagined that what happened would actually happen.”

Hesitant at First
Hoffman said when the COVID-19 vaccine was first available, she was hesitant about getting the shot.
“I wanted more data to show the effectiveness of the vaccine and that it was safe,” she said.
Hoffman was not vaccinated before she got COVID-19. Most of her family had not received the vaccine either, but that changed the week Hoffman was placed on a ventilator.
“I remember sitting in the hospital, thinking as soon as they let me out, I'm going to get a vaccine,” Hoffman said. “I wanted to do whatever I could to protect myself. But also, I really wanted to do my part to help protect others to prevent the spread of COVID-19.”
Hoffman said one reason she chose to be vaccinated against COVID-19 is because she did not want anyone to go through what she did.
Learn more about COVID-19 and watch a video of Jessica Hoffman at phelpshealth.org.